Recently I had to integrate Ajax with Share Point in order to provide much needed user experience in my current project.One of the main concern was when ever a user submit a request in a page the page get refreshed.For some users it is indeed a frustrating experience.

As every one of you do ,tell me if not, I searched in Google with the term "Integrating ASP.NET AJAX with SharePoint". Bingo.... here comes the results and I read the preview of the first search result and opened the entry.

It was from the "Mike Ammerlaan's Blog " and I started reading the post and realized that this is exactly what I wanted and no need to look for a better post for the job at my hand.

I followed all the steps for the "Adding Microsoft ASP.NET AJAX Technology to SharePoint Pages" and after about hour and so I managed to integrate Ajax to my sharepoint installation.

So I thought of blogging this wonderful post for those who are reading my blog.

Then I modified one of my web part used in the project with an update panel which takes care of your asynchronous postbacks.And then I deployed the web part in the integration server , to my embarrassment the web part was not working.Actually nothing got displayed.Started scratching my head and figuring out what went wrong.

Going back to drawing board and started every web.config entry for Ajax integration and that was fine.Then suddenly I saw in the top of the ascx page the version of the "System.Web.Extensions" assembly is 1.0.61025.0 which is the version I have installed in my development environment.Then I checked the version in the sharepoint environment.That is 3.5.0.0 which comes with the .Net Framework 3.5.And that was that. I changed the version and here comes the details.

In this page I have a list of items in a one list box and you can add selected items to another list.So started to check whether it was working.I selected an item from the source list and click on the button to move and it worked like a charm.ie the item get moved to the destination list without page getting refreshed. I was really happy with it.

But then I wanted to move another item from the list and nothing happened.Mission failed. :(

So I started looking back at the post I mentioned above and it stated that, there is a hack you need to do because of the way windows sharepoint services works.

So that was the trick and I managed to do that trick with the help of the following blog entry.

Finally I managed to integrate Ajax with sharepoint and used an update panel in my web parts.

Credit goes to those two blogs.

Posted by Indika Rathnasekara at 4:06 PM No comments: 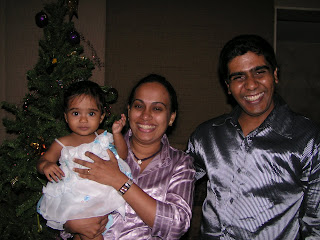 It has been a fantastic year to me and my family.There were some critical moments in my family life as well as in my work.I would like to list down some of the key moments of the past year for me.

The first one was the best in the lot. Which was the birth of my lovely little daughter.It was a fantastic moment in my life to see her coming out in to this world , and I did witness it from the theater beside my lovely wife and the first cry my daughter made was still echoing in my ears.Everybody who were in the theater was amazed of the loud of it.It was a fantastic feeling and really hard to put into words.

The second one being the delivery of xtracare portal for Xtra.When I took over the project, it was challenging simply because of the time frame for the delivery which was merely a 2 months or so.Had to cope with a dev team which consists of a SE and an intern which made your life bit tougher to transfer the domain knowledge as well as learning curve for the new comer especially with the timeframe we had.Ultimately we pulled it off in a style with the fantastic team effort.Hats off to the entire team which includes dev team , QA team BA and the PM.

The third one was a bit of a scare to my life.It almost took my life unless my seat belt came to the party.It was a very hard day at office and after releasing the xtracare build to the QA and the dev team set to leave the office.I still remember the time we left the office was exactly 00:00 hrs.I told one of my colleague Sudheera, "look at the time we are leaving the office..." and we had a laugh.It could well have been the last laugh, but luckily not to be.

I was bit sleepy as I getting closer to home and I told my self, hang on for a second I am almost there no need to stop and have a nap or a glass of water.The last moment remember was passing the 20th mile post and then to realized that my car went out of the road (to my right) and hit a fence and rolled over and landed on the road facing towards where I was coming. That was very freakish and I had no clue how did it happen.Luckily for me not a single vehicle or a person was on the road at the time of the accident.If that was the case , the incident could have been tragic.When you saw the car aftermath, it was hard to believe that how did I escape from that fatal accident.Answer to that question was wearing the seat belts.Very simple.

So I still use to do it no matter how shorter your journey is, wear your seat belts.Food for thought for you readers, make a habit of it.

The fourth one was moving to an annex closer to my wife's office.The reason was my wife had to resume her work after maternity leave and needed to find a way to feed my daughter during the day time.It is highly unlikely that we staying at Yakkala and come to feed during the luncheon interval from her office at Bellantota, simply impossible.

So we took the decision to move to a place which within the closer range to my wife's office so that she can pay a visit during the luncheon interval and feed the baby.

Credit must go to my parents who volunteered to look after our daughter and joined with us to stay at Borelesgamuwa.I am sure that was a tough call to them.Thank you mom and dad for your support in big time.

Finally I would like to take this opportunity to thank my wife for all the support given to me during my difficult moments.She helped me all the time when it was required and always ready to listen and come up with the best possible answer to the situation.That is one of the most admirable aspect of her.And thank you for every thing you did for me.